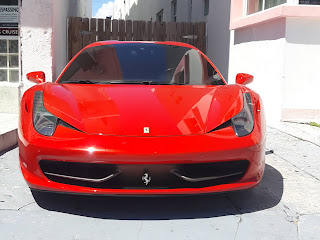 One weekend I drove to Miami Beach to take a photo for someone very important to me.  On my way back from Miami beach I saw it.  A beautiful red Ferrari.  Just parked there.  As I walked in front of it and took a picture of it I thought to myself, 'Why not me?  Why not my friends?'

You see the heroes in my life are not the newscasters, the movie stars, or the famous people that are on TV.  No.  My heroes and the people I admire are my 400+ friends on Facebook.  The one's that take the time to post what they were thinking.  What they were doing.  Or they posted a pic of a moment.  So I said to myself 'These famous people can buy this car with the swipe of a card.  How can I help my friends and I to get one
of these?'

As I sat there admiring this car I realized the world is designed so that we can't get one of these.  However I realized, 'So what!  That doesn't mean it's impossible!  Think!  Think!'  I said to myself.  Then it hit me.

So I called and messaged my 400 friends one at a time.  I apologized for not being a better friend.  I got to know them more.  I figured out their gifts, their dreams, and the people that were most important to them.

At the end of the week I was a new person.  I grew up.  A 1,000 point scorer who didn't realize until years later I should have made the extra pass to my teammates that were wide open.  I probably would have scored even more if I saw the bigger picture.  It doesn't matter anymore.  What matters is I've matured.  I've grown.  I've changed.

Then one by one I reached out to all of my 400 friends and asked them to join me in my idea I call '7 gifts to Financial Freedom'  So to end 2018 I motivated my 400 friends on a plan that will get my friends to help each other get closer to Financial Success.

So after 2018 when the ball dropped it happened.  On January 1st, 2019 all 400 of my friends gave one of them a gift of $10 dollars.  At the end of the day one of them had $4,000 dollars.  That Starbuck's coffee they were craving for.  That Dunkin' Donuts run.  That concert.  That snack.  In 2019 four hundred friends decided it would be better to help one of their friends to get closer to Financial Freedom.

Then sacrifice after sacrifice in 2 months 400 friends gave each other a random gift of $10 dollars each and they all had $4,000 dollars.  That was the 1st gift to Financial Freedom.  I was resilient.  I kept my friends motivated those 2 months on being prepared for Phase 2.

Here is Phase 2.  To end 2018 all 400 friends asked their best friend to give a friend of theirs a gift of $10 dollars because his passion is cutting hair.  He cuts hair for people and their families.  Then on March 1st, 2019 four hundred best friends gave this friend a gift of $10 dollars.  At the end of the day that friend that had $4,000 dollars now had $8,000 dollars.

Then from March 1st to April 30th, 2019 these 400 friends got their best friends to sacrifice a coffee, a lunch, a show, and give a friend of theirs a gift of $10 dollars.  At the end of August 400 exhausted friends were emotionally drained of all the time they spent talking about their friends dreams and talents.  They managed to get 400 people to give a gift of $10 dollars to each friend.  On April 30th, 2019 four hundred friends had $8,000 dollars.

Something happened on May 1st, 2019.  These friends were not as exhausted as they were the night before.  Your energy level is much different with $8,000 dollars in the bank.

Phase 3 was much easier.  You see during Phase 2 I  had my friends do a networking campaign.  They asked a bunch of friends to give a gift of $10.00's to one of their friends from May to June.  I made a profile book.  400 pages.  Each page had a pic of a friend, what their dream, goal, or talent was, and who was important to them.

These 400 friends started getting phone calls from people they networked to that were willing to give a gift of $10 dollars to a specific person in the profile book.  On June 30th, 2019 Jason and his 400 friends had $12,000 in the bank.

In July and August they didn't slow down a bit.  They continued their jobs but they found themselves constantly finding people they knew that were willing to give 400 of their friends a gift of $10 dollars.  400 Acts of Kindness.  A Gift campaign.  A Networking campaign.  It was like a 2nd career.  A career of giving.  On August 31st, 2019 they all had $16,000 in the bank.

September and October was no different from Phase 4.  Just find a 5th person that wants to give one of their friends a gift of $10 dollars.  400 Acts of kindness.  A Gift campaign.  An Appreciation campaign.  Whatever they decided to call it.  On Halloween these 400 friends had one more thing to celebrate.  $20,000 dollars in the bank.

The last 2 holiday months Thanksgiving and Christmas 400 friends decided to come together.  I looked at the Ferrari picture one more time as I headed into Phase 6.  Gifts were not expensive at all.  Black Friday lost 400 Customers.  Then on December 31st, 2019 four hundred friends stuck their chest out because of all their hard work.  The 7th gift of Financial freedom is to do absolutely nothing.  Just enjoy the gift of starting 2020 with $24,000 dollars in the bank.

The simple walk from Miami Beach, the beautiful red Ferrari, and an Epiphany.  I realized that we are all Empowered-Individuals.  And we have the power to change the world's design.

Posted by Empowered-individuals.blogspot.com at 3:14 PM 18 comments: