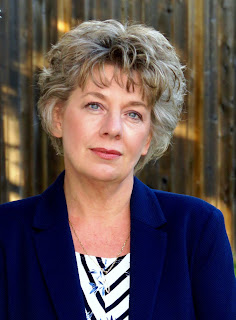 "Every Great story starts with a blank page.  A blank screen.  You can put that blank page in front of random people and they will see just that.  A blank page.  Or have them sit in front of a monitor.  Many will see a blank screen.  A Great Author will look at that same page and see the beginning of a great story.  And that same screen they will look at and see the start of a book that will stand the test of time.  One of these Authors J.C. Paulson lets us know where she gets her motivation."

"First, Jason, I want to thank you so much for inviting me into your blog. So appreciated!"

"I’ve been a journalist for more than 25 years, and I suppose the idealism that comes with the job — to change the world through reportage — has followed me into fiction. You can deal with difficult subjects in a completely different way, allowing readers to engage in the story while, hopefully, absorbing your point."

"Broken Through is the second book in my “Adam and Grace” series; the first is titled Adam’s Witness, which tackles homophobia. Broken Through’s plot begins with a possible real crime in my community, where a woman who was suffering domestic abuse was found dead in her basement. I wanted to investigate the reasons for violence against women, to explore the ways they are unprotected in society. I also wanted to write a fast-paced crime/mystery novel with a lot of action and love."


Jason:          "Briefly describe Grace, and which one of her characteristics can you relate to most?"

"Grace is an amalgam of the powerful women journalists I have worked with, and she’s much tougher than I. If I stumbled on a body, as she does in Adam’s Witness, I would probably faint. Not Grace."

"But I can relate to her passionate reportage, her desire to right the wrongs of her community. I understand how her personality can encompass both professionalism and turning into a puddle when she’s with the intuitive crime-solver, troubled and ridiculously handsome Sgt. Adam Davis."

" Sorry, that’s not just one characteristic! I guess I tried to make her a complex character."


Jason:          "For those who want to read your book, please briefly describe Broken Through."

"Why do authors have so much trouble writing synopses of their books? Speaking for myself "

"Broken Through begins with the death of a dearly-loved dog, a speeding car that smashes into another, and then the discovery of a woman’s body. Grace’s friend, Suzanne, lives next door to the victim. Adam, unfortunately, is away at a conference, so the two women struggle down to the police station in the middle of a cataclysmic storm and widespread power outage. When Adam returns, he must tackle an increasingly complex case while fighting his PTSD, with Grace’s help. They both know Suzanne is at risk, and try to protect her even as time works against them to find the killer. I hope that’s brief enough!"

"I am working on the third book in the series, titled Fire Lake. It will take readers into the beautiful lake region of my province. This one deals with military veterans and further explores the issue of PTSD as experienced by soldiers and law enforcement officers."

"For most readers, it’s available on Amazon in most English-speaking countries as an ebook (Kindle) and in paperback."

"Thank you so much, again, Jason! All the best."

"So J.C. Paulson was motivated by using her writing to change the world.  She also wanted to investigate the reasons for violence against women.  Last but not least she doesn't forget about the reader as she is also motivated to give us a fast-paced novel with just the right dose of crime, mystery,  action, and love.  With all of these elements in one book blended together brilliantly click on the link above and buy "Broken Through"."