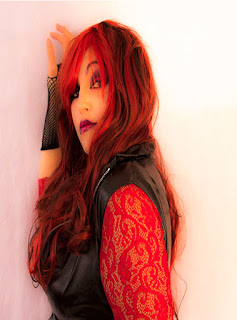 "There are many Great Authors out there and I am very interested in how they all seem to find their Originality.  They see everyone go to the right, without hesitation, they go toward the left.  They figure out that a story wasn't told in a certain way some people just accept it.  Great Authors say to themselves, 'It's never been told in this way, I'm about to change that.'  Stacie Sultrie is one of those Great Authors.  What motivates Great Author's like her to choose her own path and not follow the footsteps of a path that's already been taken.  She takes the time to give us some details about where she gets her motivation from."

"I stumbled upon the reverse harem genre last year and devoured hundreds of these books. Unfortunately, I began to feel like the majority of them had a similar plot line - a weak woman made powerful by men, or an average girl turned into a beloved princess. I wanted something different, so I started The Lost Lunason Series and focused on a heroine that is formidable in her own right. I also chose to write this series from a third person perspective – something atypical of this genre. I wanted to offer my readers a unique experience."

"Cassia’s character starts out with a precision focus on one thing – reuniting with her true love. Cas is a thoughtful and compassionate individual that has to overcome many obstacles and adapt to a new world while attempting to heal a broken heart. She prefers to listen and gather the facts before speaking or taking action - something that is in direct contrast to my own personality. Cassia loves deeply and has no problem expressing her feelings – something I can easily relate to. Her persona grows throughout the series as she faces new hurdles, and I think she’s a heroine that many women will connect with."

"Cassia is the most powerful enchantress born in centuries. She’s devastated by the loss of her soulmate and bewitches herself to sleep for eternity. Two centuries later, something pulls her from her slumber, and she wakes up a new reality. She must navigate the modern world, fight against an evil that has always sought to destroy her, and somehow find time to bond with her lovers. Cassia has three men that are entirely devoted to her; one the classic boy next door, another is an archetypal bad boy, and the third has some surprising secrets. The series offers a refreshing new take on some paranormal stereotypes, especially vampires (the reader won’t discover this until Chasing Cas).
The Lost Lunason Series is a slow-burn reverse harem romance that should be read in order. While My Soulmate Slumbers focuses mainly on introducing the characters and delves into their backgrounds, while the remaining books in the series are packed with action and exciting twists. Though I have included a summary of each book in the beginning of the next, many subtle details and plot points begin in book one and continue through the series."

"I am busy trying to finish Claiming Cassia, book three of The Lost Lunason Series. Though I can’t share too much without revealing spoilers for the first two books, I can say that book three reveals some secrets about Celestia’s past. Celestia is Cassia’s sister and becomes a more significant part of the story in this book. She finds herself in a difficult situation, and Cassia is going to need all three of her mates to help her sister."

"All of my books are available to buy on Amazon, and free to read for Kindle Unlimited! Currently this series is only available as an ebook, but for readers that prefer the real thing I will be coming out with a physical copy of the series upon the release of the final book this spring! You can find all three Lost Lunason books on my Amazon author page, as well as an awesome video trailer for the series.
Thank you for reading my interview, I hope you enjoy the series! I appreciate feedback of any kind and can easily be found on Amazon, GoodReads, BookBub, and Twitter! A special thanks to Jason for featuring my series on his wonderful Dreamer’s Blog!"

"Stacie let us know that she is motivated by her want to give her readers a unique experience.  So she sees something done in a certain way and her creative mind sees 'another way'.  If someone tells a Great Author that writing in third person, the odds would be against them, Stacie Sultrie and the other Great Authors would smile confidently and say 'That's ok, I'm here to defy the odds."  Book Lovers and Fans of Stacie Sultrie take advantage of the link above and buy "My Soulmate Slumbers: Book 1 of the Lunason Series."