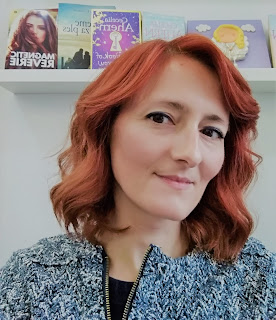 "Great Authors have something deep inside of them.  Some of them know it at a young age and others realize it over time.  We all have a talent.  What happens sometimes is we don't see it.  Better yet we are not looking for it.  Whatever the case may be there is nothing that can come between a great Author when they get that great Idea.  That moment in their life when their calling reaches out to them.  The greatest part is when the Great Autbor answers that calling.  Nico J. Genes is one of those great Authors that teach us that when a great idea comes your way don't let it pass.  It was meant for you!  Nico breathed life into that great Idea and created an amazing Novel.  Nico let us know what motivated her."

"I am often asked how did I come up with the idea for my first novel, “Magnetic Reverie”, the first book in The Reverie series. It was years ago, I was traveling by train from Ljubljana to Zagreb, where I worked at the time. It was a two-hour trip and usually, I would read, admire the view, listen to music, deal with job emails or sleep (when I was traveling at a very early hour). But that day, in October 2013, I didn't do any of the above. Out of nowhere, an idea was struck! I picked up a pen and wrote it down in my notebook. That was the beginning of my first novel. As my life was hectic I couldn't write more than 10-15 pages then. Luckily for me the idea stood by."

"A few years later, I moved closer to the beautiful city of Šibenik, Croatia, on the magical coast of the Adriatic sea. Being close to the sea was what I wanted at the time. With its proximity, and having the time on hand I continued writing my novel. And finished it within a few months."

"Lana is beautiful, smart, young, self-confident, sociable, it seems she has everything, except for a child. Claire, on the other hand, lacks self-confidence, she is gorgeous but she doesn't see it; she had a tragic childhood, she doesn’t socialize, doesn't trust many people, in many ways she is the opposite of Lana. But with all her imperfections she is more real than Lana, who tends to be superficial at times. Together though they bring the best of each other. I can relate to both of them regarding certain things but Lana wins in this case."

"Being the first novel, I’ve written and published, “Magnetic Reverie” will always have a special place in my heart. First of all, it is a love story, but not a typical one and it comes with a strong message. Lana, a young married woman, sees herself as heterosexual. Unexpectedly, she begins to have a dream that chases and occupies her thoughts so much, that it changes the essence of who she is within. She discovers a new side to herself, something that she had no clue existed! The intensity of the emotions, love, passion, and addiction darkened by feelings of remorse forces her to make the toughest choice in life."

"I am in the middle of my fourth book and all I can share publicly at this point is that my WIP is based on a true story. At the same time, I have been playing with the idea of writing the third installment in The Reverie series. “Reverie Girl”, the sequel, has a perfect ending but I was asked by many of my readers to write some more as they loved the characters."

"“Magnetic Reverie” ebook version is Free to read with Kindle Unlimited (Amazon) or can be purchased at this link:


The paperback is available for purchase on Amazon, Barnes&Noble, Booktopia, Pothi, and Book Depository.

The readers have also the possibility to purchase a signed copy and they would have to contact me directly.

"So Nico J. Genes was motivated by a great Idea.  She couldn't finish it at first but years later when she was in the perfect location she was able to finish her Novel within a few months.  She never let it go.  In life there are moments that were meant for all of us.  Ideas that cross our minds that only we can fulfill its Destiny.  Nico took her idea and made an amazing Novel out of it.  She teaches us all that you don't have to always answer your calling right away to be successful.  You just have to never let it go.  Keep it with you and you will know when the time is right.  Nico created a book with amazing characters and a unique story that will keep your attention until the very last page.  Copy the link to her ebook right above and buy "Magnetic Reverie".