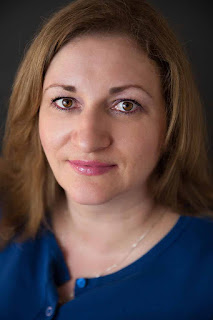 "Great Authors all have an amazing story to tell.  Whether it's the story they wrote or their own story.  At some point in their life they embrace their gift and decide to share it with the World.  A simple thought forms in their head. The image of the main character.  Could be a story that played in their head or a dream that felt so real.  Wherever that spark came from it sparked this drive of inspiration that was so powerful it didn't end until their novel was complete.  Sherry Leclerc is one of these great Authors.  She let us know what motivated her."

"The Guardians of Eastgate is a story that started in my head when I was a teenager—many years ago. It started with a conversation I had with my mother about a story we’d heard on the news. Over the years, there have been TV shows and movies that came out with similar plot lines, so I’ve had to change many things about it. The story it is now hardly has any similarities to the original idea. The main things that are the same are some of the abilities the main character has and her personality.

"I’ve been writing since I was very young, starting with poems, song lyrics, and short stories. However, it took me many years to finally write the novel that I’d wanted to write. What finally pushed me to put myself out there was my mother’s battle with cancer and her subsequent passing. She spent the last three months of her life in hospice, and I spent as much of that time with her as I could.

During that time, I had a lot of opportunity to think about mortality, and what regrets I’d have at the end of my life. Writing was something I’d always wanted to do, but I didn’t have the self-confidence to put myself out there. Now I realized if I didn’t at least try, I would always regret it. I already regretted not writing that first novel in time for my mother to read it and appreciate it, so I decided to stop putting it off and finally get it down on paper."

"Maelona is the strong, silent type, so to speak, especially at the beginning of the novel. At the outset, she is afraid to be her full, true self, and she’s afraid to let anyone get too close to her because she’s worried she’ll accidentally hurt someone. She is powerful but does not feel very in control of her abilities. She listens to others, is very caring, and is greatly disturbed by the divide between the different people in her world. She herself is the product of three different backgrounds.

"Like Maelona, I also like to listen more than speak, and it took me a long time to be true to myself. I’ve always considered myself a writer but, until tragedy struck, I was too afraid to tackle the novel I always wanted to write and put it out there for all the world to see.

"Like Maelona, I also find discrimination based on differences, be their race, gender, socio-economic status, sexual orientation, or anything really, very upsetting. Like her, I think that every individual has their strengths and weaknesses, no matter the background, and if more people were looking at what others had to offer rather than focusing on differences, then the world would be a much better place."

"On the surface, The Guardians of Eastgate is your classic, entertaining, epic fantasy tale. An evil sorcerer has been pitting the different peoples against each other for years in the hopes of destabilizing the realm so he can take over and name himself Emperor. Maelona must save a keystone that can keep the sorcerer from accessing an immeasurable magical source, and on the way she tries to bring the people of the realm together to stand against the bad guy."

"Underneath all of that is a story of self-acceptance and the acceptance of others, of realizing how strong the good people of the world can be when they stand together rather than stand divided.  There is also a love story sub-plot where, the more Maelona lets her special someone in, the more she allows herself to be her true self and finally accept love and friendship from others.

"The second book of the Seers Series, titled The Dragon Shifters at Southgate, has recently been released on Amazon in Kindle and paperback formats. It will be also releasing more widely to book stores by mid-January, once I’ve had the opportunity to check the proofs."

"In this book, a second seer champion, Talwyn Sevi, must protect the keystone located in the kingdom of Southgate, but knowing she can’t do it alone, she calls upon a group of dragon shifters, who’d been in hiding for four hundred years, to help her. In return, she offers her help and protection, and information that can secure their future."

"I’m also about half way through the first draft of the third book in the series, which is titled The Warrior of Westgate. I would be farther along with that one, but I got hit with inspiration for another fantasy series and paused to start work on the first book in that series.
In 2019, I hope to publish the next two books in the Seers Series, as well as publish at least the first book in the new series, tentatively called Flight Masters."

"The Guardians of Eastgate is available through Amazon in Kindle, paperback, hardcover and audiobook. It is also available in Kindle Unlimited. It can be purchased at other online stores as well, such as Barnes & Noble."

"So Sherry was motivated to write "The Guardians Of Eastgate" by a story she had in her head when she was a teenager.  It also was started with a conversation she had with her mother about a story they both heard on the news.  Those were the sparks that started everything.  What I really appreciate about this impressive Author is the way she made so many changes to it that now it hardly has any similarities to the original idea. That takes time.  It takes patience.  It also shows she wants to be as original as possible and give the Reader a unique experience.  Not wanting any regrets pushed her to put herself out there.  Now she successfully completed her novel and she is an Inspiration.  Go to Amazon.com, search for Sherry Leclerc, and buy "The Guardians of Eastgate".