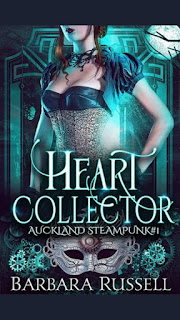 "Great Authors write about what they love or have a passion for.  Whether it is the genre, a main character, or a great story that they believe in they write it in such a way that you visualize everything as clear as watching a movie.  Page after page the vision that the Author had for the book comes alive in the Reader's mind every sentence they read.  These Authors know their character's strengths and their weaknesses.  They know their story and they create it almost exactly as they pictured it the first time it popped into their minds.  Barbara Russell is one of those great Authors.  She let us know what motivated her."
Jason E. Foss

"I’ve always loved steampunk stories. The first I read was a steampunk/futuristic novel set in Italy by Stefano Benni. A rarity since the majority of the steampunk novels are set in Victorian London, and I fell in love with the genre because it’s always a bit funny, has some sci-fi elements, and there’s usually a mystery. I’m a sucker for mysteries. I read everything by Agatha Christie and Conan Doyle. So I thought, why not set a steampunk novel here in Auckland? This gave me the opportunity to add a bit of Maori culture in the story."

"They say that an author is the sum of all of his characters, including the villains, lol. But I feel closer to Trigger, the orphan Isabel—my main character—takes care of. He’s fun to write and I don’t have to worry about typos because he uses very bad grammar, lol."

"Auckland, 1884. The Supernaturals are frightened. Despite being able to do extraordinary things like teleporting or lighting a fire with a stare, a serial killer, the Heart Collector, is slaughtering them. He rips their chests open and removes their hearts."

"While other aristocratic, nineteen-year-old girls spend time dancing, Isabel trains hard to become an MI7 agent—Military Intelligence Seventh Division, a crime squad run by Supernaturals. The Heart Collector murdered her best friend, and enrolling at MI7 is the best way to help catch the killer."

"Isabel senses other people’s feelings as if they were her owns. But MI7’s leader is too worried about Isabel’s safety to let her join the team."

"Eager to prove that her power is valuable, Isabel volunteers to meet Murk, a dangerous Supernatural man who can turn himself invisible. MI7 desperately tried to recruit him and failed."

"She believes that her power is enough to convince Murk to become an MI7’s agent and help apprehend the Heart Collector. If he wants to attack her, his feelings will broadcast his intention, and she’ll be ready."

"What Isabel isn’t ready for is to fall in love with the man who will collect her heart."

"I’m currently writing book 7 of the series. The first three books are in Isabel’s point of view. The next books are written with others POVs."


And you can watch the trailer here:

"Batbara Russell was motivated by her love for steampunk stories.  She also let us know that she is a sucker for mysteries.  What I really like about this great Author is that she knows the majority of the steampunk novels are located in Victorian London and still decided to set hers in Auckland.  That bold and creative decision let's the Reader know that her book is not going to imitate what they've read before.  She is going to give them something new that will keep them glued to the pages.  She knows her characters well and she describes her novel with so much excitement.  When an Author shows that kind of passion when speaking about their novel the Reader is going to get that same great energy throughout the book.  Click on the link above and buy "Heart Collector"

Posted by Empowered-individuals.blogspot.com at 4:16 PM