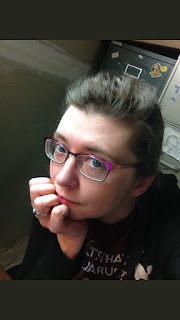 "Great Authors have so many qualities that keep taking their writing to the next level.  They actually care about their Readers.  They write with Passion and they have a vision that they believe in so much they have to make sure it gets out.  They want to share it with the World!  Some of my favorite kind of Authors are the ones that see everyone do something one way and they take themselves and their creative imagination and they write another way.  They give us something different and it works every time.  Because they believe in it and when someone writes believing in something from their very core the Reader will believe it too.  Kat Caulberg is one of those great Authors.  She let us know what motivated her."

"History, first and foremost. I've always been obsessed with history, especially the age of sail. Second, I adore a good love story. So often, history + love story = unhappy ending. I wanted to write a time travel novel that bucked that tradition. And to be honest, I wanted to write a story that would make me happy when I needed a little pick-me-up after it's all said and done. I hope it does the same for my readers."

"Penny, definitely. She's my awkwardness in a crowd, my hope for a better tomorrow, and the brave woman I wish I could be when the going gets tough. She and I also share a love of history, and being a little too blunt sometimes."

"Three Star Island is a time travel romance set in 1721, on a backwater island off North Carolina's Outer Banks. William Payne is a pirate seeking redemption for his blood-soaked past, and is rescued by outcast Penny Saunders when he washes up on Three Star Island. It's an exciting love story that's got a bit of history, humor, and some ripping good action scenes."

"Lots, from how stockings were tied, to what sort of underwear women wore in 1721, to which words had and hadn't been invented during the period. Not to mention the types of sailing ships which were prevalent during the time, the history of slavery in St. Augustine, Florida, and how slow it took for items such as novels to travel from England to America. It was exhausting and wonderful."

"There's a link on the front page my webpage (as well as a free excerpt from the novel), and it's available for preorder on Amazon."

"Kat Caulberg was motivated by History.  She has always been obsessed with it.  She adores a good love story and that was her second motivation for writing this well-written novel.  When someone uses the words passion or obsession they are going to write something that they believe in.  They are going to give their Reader something that will keep their attention.  Because not only is Kat obsessed with History but she is brave and creative enough to give us a love story with an ending that you will not know until you read it.  When you are finished reading you will appreciate this Authors care for her Reader and her willingness to give them something new.  Click on the link above and buy "Three Star Island"."

Posted by Empowered-individuals.blogspot.com at 6:34 AM