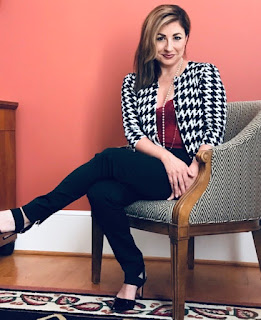 "Great Authors have a talent that needs to be shared and there are a few things that separate them from each other.  One of these powerful gifts that they have is their own creative imagination.  Once they have an idea about a story they envisioned they can picture it so vividly that when they write it the Reader can picture it just as clear.  That passion that they have about that great new idea about their book will reflect on each page.  Their belief in each of their characters and the level of excitement that they feel towards their story will be given to the Reader.  The Reader loves to get lost in a great story.  It's the unique imagination and the excitement that they have for bringing great stories to life that will always be the Reader's  delight.  Jackie Anders is one of these great Authors.  She let us know what motivated her."

"I've been writing songs since I was 7. I've had several produced but nothing came of it. Therefore, I went to college for business then later finished my Masters in education in order to teach. Afterward, I started teaching high school and had some really good open ended discussions with my students about the world in general. There were so many things that they were surprisingly interested in, but they never learned about. Right about that time, I was also reading more than usual because I finally had the time. I always had a love for historical fiction, romance, and science fiction. So it didn't surprise me that one day, out of the blue while I was thinking about my discussions with my students, a story popped into my head with a setting in the Middle East. I had never written anything before but music. However, I thought I'd give it a try. I saw Kyla (the American career-woman) first, especially her drive and ambition. I immediately immersed myself in her as we both went back in time. But it was like I was being taken on a tour of Ancient Rome through her eyes. So, I sat down and wrote it! The rest of the story and the special ops guys just jumped right in, and it was like we were all trying to survive that hostile, foreign world together while also trying to stop a rogue scientist from destroying ours. It was intense in my head. Lol!"

"I would have to say Kyla's ambition is what I relate to the most. She didn't let anything or anyone distract her from her goals. I was so much like that before I had kids. After kids, my career and my dreams got put on hold. Now that my kiddos are older, I am able to get back into doing what I love. Kyla may not have had kids to teach her patience and self sacrifice for others, but things happen on her journey that show her these virtues along the way."

"Phoenix is probably best described as the perfect combination between the tv show-Timeless, Outlander books, and the Terminator movies. It has something for everyone! From military, action, romance, suspense, and some inspirational undertones, it will have you turning pages quickly to see what happens next."

"I am! Phoenix: Field of Mars is the first book in the Phoenix trilogy. However, it can be read as a stand alone. With that being said, Phoenix: By the Sword (2nd book in the trilogy) is almost complete. It's going through revising and editing right now!"

"Go to my website: www.jandersbooks.com  I have a link where you can purchase it, either paperback or the Kindle version. Amazon and Barnes & Noble also carry it! You can also follow me on Twitter: @jandersbooks or Instagram: author_jackie_anders where I give updates on my books, do blog posts/videos, and offer giveaways!"

"Jackie Anders was motivated by a story that popped into her head with a setting in the Middle East. My favorite thing that Jackie said about her experience while writing her book was that 'it was intense in her head'!  You better believe that intensity is going to be in her story.  That's one of many abilities a great Author has.  The ability to put the visions and the intense and exciting ideas from their imagination on to the paper.  Their pen will create life to her story.  The keyboard will put her vision onto her monitor.  When a Reader reads her story they will appreciate how much time she put into making sure they feel what she felt while writing it.  Click on the Link above and buy "Pheonix: Field Of Mars"."

Posted by Empowered-individuals.blogspot.com at 10:20 AM