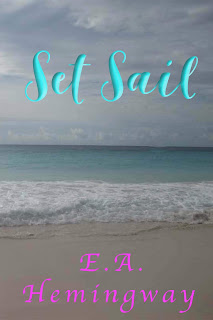 "Great Authors have this amazing ability to give the Reader an overall unique experience.  Their story starts before the book is even open.  The book cover already enhances the Reader's imagination to the point that they want to walk right into it like it was a Portal.  As soon as they read page one it might as well have been one.  All of a sudden as each chapter is read you feel like you are one of the main characters depending on who you relate to the most.  E.A. Hemingway is one of those Great Authors that takes the Reader into the story before they even open the book and keeps them interested until the very last page is turned.  She let us know what motivated her."

"I am a huge lover and fan of cruises.  I have always enjoyed being on a hotel of the sea and during my last vacation on a cruise, I came up with the idea of a Singles Cruise theme.  While aboard my family vacation, there were small events they held for “Singles” which were far and few between.  So I researched and saw that they do indeed host Singles Cruises for people to eventually meetup and enjoy themselves while aboard.  It’s like a Tinder meets the Sea.  So Set Sail was born."

"I believe I relate very strongly to Gabrielle’s character.  Although I am not as young as she is, I do have a warped sense of love and romance.  Perhaps, I too, was jaded by the amount of Romance stories I’ve read.  As a huge fan of Jane Austen, I strongly believe that all women secretly pine to find Mr. Darcy."

"Sick of her demanding paralegal work and failed dating life in NYC, timid Gabrielle Taylor, after much cajoling, embarks on a Singles Cruise with her best friend. She decided to leave caution to the wind and let Carpe Diem be her motto."

"Billionaire and playboy Julius Pierce is persuaded onto the same cruise to get away from a brewing sexual harassment charge and decides to use a phony persona while on board.  Julius and his best friend intend to enjoy their week of food, overflowing drinks and plenty of single women."

"Gabrielle and Julius’ attraction is immediate and they instantly partake in a lurid affair, though he must continue to lie in order to keep his identity concealed.  After returning from their cruise, Gabrielle is pulled back to the grueling work at her law firm for an emergency meeting only to find her firm represents Julius Pierce in his harassment lawsuit.  With his identity now revealed, Gabrielle is heartbroken and furious that she was duped."

"With his cover now blown, Julius must convince not only Gabrielle that his feelings for her were genuine but that he is also innocent from scandal."

"Yes.  I am currently working on the sequel to “Set Sail” titled, “Set Straight.”  So far I love the direction I am taking in and hopefully you will as well.  I can’t give too many details or it will spoil a bit of the ending of “Set Sail,” so stay tuned…pun intended. J"

"Set Sail will be available, if all the stars are aligned, for immediate download on all platforms by January 15th."

"So E.A. Hemingway was motivated by an idea she came up with of a Singles Cruise Theme.  The book cover is very inviting and it has a vacation vibe to it. The book cover matches this novel perfectly!  She puts the Reader in 'vacation mode' before they even start to read.  I always hear from plenty of Authors to write about what you know.  She loves cruising so this Novel is going to be very detailed and I am certain the Reader is going to feel as if they are on the Cruise.  Add that with the unique story line of a singles cruise getaway that starts out with a fake name, lust, love, drama, and passion I can easily see this Novel being a page turner.  On Jan. 15th go to Amazon.com and buy "Set Sail" by E.A. Hemingway."


Posted by Empowered-individuals.blogspot.com at 12:11 PM