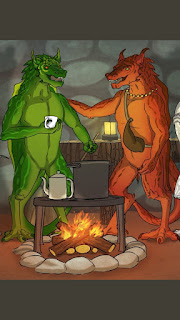 "Great Authors not only come up with great ideas but they can organize those ideas and they know exactly what to do with it.  They build on it.  Their imagination comes up with even more great ideas.  Next thing they know their ideas become someone's favorite book.  Julia Scmeelk are one of these great Authors that has the ability to take her ideas and her elevated imagination and build a World with it.  She let us know what motivated her."

"To start with, Gordon’s Pride is the first of a very long series. After I wrote the first rough draft during the summer of 2012, I knew I had found my “Pern,” a world I could write in for my whole life. For those who are unfamiliar with the fantasy writer Anne McCaffrey, I highly recommend her. She was a world builder, much like I am."

"Anyway I was teaching during the school year, writing during the summer and the story needed a world to fit in and I created it to give Hanna, Gordon, Grabon, and Heron a home."

"It probably sounds backwards, but I started the story with Gordon and Hanna and while the focus is on their relationship, it is also on all the other relationships in the story."

"Gordon and Hanna are human, male and female and the planet connects them with a psychic bond that if they break, twist or harm, it will end up damaging them both or even killing them. The bond links their lives, thoughts, emotions and sensation. Yep, they were matched up as strangers by the planet. Fortunately the same thing had happened to Gordon’s Grandfather, so he had some idea of what to expect, but most humans do not have a strong enough connection to allow that to happen. It just happened that Gordon was enormously strong and connected to the planet."

"Meanwhile the reader meets Gordon’s good friend Heron, a human who is wild, unkempt and travels with a dragon he calls Grabon. Most humans are terrified of the beasts and those who know about Grabon think Heron has tamed him. Gordon realized they have more of a partnership, but he has never actually gotten to interact with the dragon."

"Well everything abruptly shifts and changes once the bond starts growing between Hanna and Gordon, and Grabon becomes fascinated with Hanna. Through this fascination, he reveals his intelligence and abilities and eventually claims the territory including not only Gordon’s farm but the nearby village as well."

"That sets up humans who support the dragon against those who either want to flee or attack. It turns into a lively adventure. All the while Gordon and Hanna are falling in love with one another and Grabon is watching his long time companion reconnect with other humans."

"I am rushing to finish the 7th book in the NewEarth Series featuring Brom, Mox, Grabon, Heron and all the denizens of the Combined Territories. The number of characters has gotten so large that my website has charts available for readers."

"The easiest way to buy the NewEarth Series is to get it off Amazon, https://t.co/SxBRNSKYcY but stop by my website to check out the art and see what mammalian dragons look like and some of the other creatures that inhabit this sentient planet that is so consumed with her people’s lives."

"Julia Schmeelk was motivated after she wrote her first rough draft of "Gordon's Pride" in the summer of 2012.  Right then and there she knew she found A world she would write in for her whole life.  When someone with the imagination of Julia Schmeelk creates an adventure like the NewEarth Series the Reader will feel like they are in the Journey themselves.  There are many great things about Julia Schmeelk and "Gordon's Pride".  The best part about reading a book that makes you feel like you are along for the ride is the fact that the Adventure doesn't end on the last page!  "Heron's Bonds" is awaiting you after you get a taste of the NewEarth Saga.  Click on the Amazon Link above and buy "Gordon's Pride"."

Posted by Empowered-individuals.blogspot.com at 9:42 AM