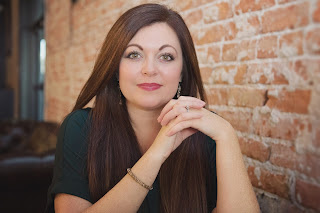 "Great Authors take the imagination and give it life!  They inspire us with their journey and motivate us to start ours.  They can take scribbling in a notebook and transform it into the beginning of an epic adventure.  This is "A Dreamer's Blog" and there are many great Authors out there that give us the idea that our dreams can come true.  Katie Backer is easily one of those great Authors.  Her creativity opens our minds and gives us a whole new world.  All we have to do is open her book.  Katie Backer let us know what motivated her"

"Initially, I began writing Nav’Aria on a whim!"

"I was a substitute teacher at the time (before I got my teaching position) and had run out of reading material for the day while the students were testing. I started doodling, and kinda brainstorming in a notebook to kill time. I had a lot of experience observing teenagers as a soon-to-be teacher, my brother had just gotten a tattoo on his finger, and I had always loved Fantasy and the unicorn painting my grandpa had given me, and so with all of that in mind, it just kinda spilled out onto the page. And so, Darion and the Nav’Arian Unicorn warriors were born."

"I didn’t take it seriously for many years though. At first it was just a hobby but soon I realized that it was taking shape as a real story. Upon adopting my daughter in 2017, I realized that this book (which has adoption themes) was something that I wanted to finish for myself—and for my daughter and the “Darions” of the world. I could now relate to my characters so much more as an adoptive mom, and I had a renewed vigor to finish it. It transformed from a “hobby” or a “just a story” to a “BOOK” in my mind, and once I changed that language, that was all the motivation I needed. I pumped out the second half of the book in a matter of months and began researching the next steps in the publishing journey… and now here we are!"

"TWITTER POST (kinda relates to this question if you want to pull from it at all):    8 years. What started out as random scribbles while working as a substitute teacher in 2011, is now published as an ebook and sitting in my hands as a paperback TODAY. (Author proof!) For years, I kept my writing secret, downplaying it as "just a hobby". But the dream was there.And so I kept at it. I decided I didn't want to play the "coulda/shoulda" game. I decided to finish it, and then publish it. For no other reason but to prove to myself that I could. No. More. Secrets. That my dreams have power, and they can take flight to unimaginable places."

"This book is a gift for me. I hope it will be a gift for you as well. My message is: keep dreaming. Keep believing, keep striving, & keep achieving. I don't care how cliché it sounds, it's the truth. Give yourself a chance to dream. To soar. To be epic."

"Now as an adoptive mom, I can relate to Carol (Darion’s adoptive mom) and empathize with a lot of her emotions."

"I can also relate to Lyrianna (the Queen). I wanted her to be a strong character that is able to overcome all that is thrown at her and come out stronger on the other side… “a beauty from the ashes” type of character arc. Having experienced such adversity and torment, she doesn’t break—she’s not a victim, and if anything, her spirit is strengthened with the resolve that she will see her family again, and they will together defeat the evil Narco. I always loved her strong spirit, and sense of pride. She isn’t willing to give in—and I like to think that I, too, have a similar resolve."

"And lastly, I love the fierce sense of love and loyalty that Trinidad (the Unicorn) possesses. When I volunteered at an Orphanage school in Ambo, Ethiopia, the staff called me “Anbesit”, which means “lioness”. I think a lot of my fierce loyalty and protection for the vulnerable (children in my case, a prisoner in Trinidad’s), transferred over to the page."

"Darion is an insecure teen living in Oregon, struggling not only with his desire to belong, but also to make sense of his spreading, glowing birthmark and strange dreams. Meanwhile in a parallel universe, Vikaris, the rebel King, and epic unicorn warriors (as well as other mythical creatures) battle the evil usurper, Narco, for control of the Realm. Somehow Darion is connected to it all, and the answers he seeks are in Nav’Aria—but they may come at a cost!"

"I wanted to see unicorns not as pristine, passive creatures in the background, but complex, sentient beings at the forefront of the tale... and the fight! Battling alongside humans to rid their land of the evil Narco and his tyranny. However, being at war also brings the realities of loss, capture, and betrayal. This is not a lighthearted fairytale, but a look inside a kingdom ravaged by war...."

"Poor Trindad. What will come of him you ask? ... Well, I guess you better read it to find out!"

"Labels and questions swirl in Darion’s troubled mind. Why did his birthparents abandon him? Why is he haunted by visions of mythical beasts, a captive, and her torturer? And why is his birthmark glowing?"

"Discovering his true-identity may cost Darion everything, as he is suddenly confronted with a war-ravaged Realm and the answers he has always sought. Rav’Arians wreak havoc at the command of a sadistic usurper who led a grisly coup against the Marked Royals. Unicorn, Centaur, Nymph, and man have joined forces to face the oncoming threat of evil, yet their forces are slipping, and hope seems lost."

"Three generations interwoven throughout Nav’Arian history will reach as far as rural Oregon, to see the Kingdom unified once more."

"The only question is, will the return of the Marked Heir help or hinder in the fight for Nav’Aria?"

"YES! The sequel, Nav’Aria: The Pyre of Tarsin is in full-swing! It picks up right where Book 1 left off, and all I’ll say is, it is EPIC! There is MORE of everything in this book, and it is so thrilling to write and see it take shape. (There is an excerpt of the prologue at the end of the Nav’Aria: The Marked Heir paperback copy)!"

"Nav’Aria: The Marked Heir is available on Amazon in e-Book and paperback versions, as well as, at This House of Books (for the Billings locals).
Readers can also request it at their local libraries!"

"Connect with me on social media!"

"Readers can find me (K.J. Backer) on Instagram, Twitter, Facebook, and Goodreads if they wish to connect more, and/or visit: kjbacker.com to learn more about Nav’Aria. They can also sign up for my monthly newsletter on my website to learn more about upcoming events, giveaways, and the sequel release date, etc."

"Katie Backer was just doodling in her notebook just to kill time as a substitute teacher.  Her grandpa's unicorn painting he gave her motivated her to write this epic adventure in her book.  My favorite thing about Katie is how her book has adoption themes and she is also an adopting mom.  To write a book for her daughter and the "Darion's" of the world is so powerful.  To write a book that they not only relate to but shows them how powerful we all are and that as long as you have a dream you are trying to reach you can fly!  Let Katie Backer inspire you because her adventure with words will take you on a magical ride.  And when you're done with the book you will most likely be ready to create a new journey of your own!  Click on the link above and buy "Nav'Aria: The Marked Heir”."

Posted by Empowered-individuals.blogspot.com at 1:05 PM