T.A. Bunker "A Ghost's Guide To Haunting" An Interview with T.A. Bunker by Jason E. Foss 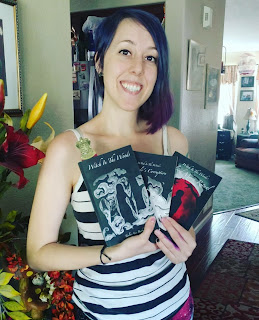 "Great Authors are unique in their own way but at the same time they have one thing in common.  They have the ability of grabbing our attention.  Whether it's to make their Readers laugh or to take them on a 'Journey of their words' by the end of their book the Reader will be intrigued.  Fans of the Paranormal and Haunting stories look for Authors that can fulfill their reading desires and share the same interest.  What better Author than one that grew up obsessed with it!  T.A. Bunker is one of those great Authors that lovers of the Paranormal go to for a great read.  She let us know what motivated her."

"One day, I was going through some of my old creative writing stories and found one titled: A Guidebook for Ghosts. It made me laugh and I felt it was time to create something whimsical and light hearted, maybe some dark humor."

"As a young teenager, paranormal shows were on all the time. I became obsessed and realized that I had experienced some similar things. I wanted to become a paranormal investigator long before I wanted to write books."

"A Ghost's Guide To Haunting is a work of fiction made with the intent to educate new ghosts of different types of the haunt, as well as to help them get started with their afterlife. You can expect some dark humor, interesting facts, and a few puns."

"I am, it's called "Forlorn" and it's a survival/romance novel with a touch of sci-fi. It's about a young woman named Gabby who meets a man named Nathan at a grocery store, moments before an invasion takes place. Together, they try to escape and survive."

"A Ghost's Guide To Haunting is available on Amazon in both paperback and as an ebook. Those with Kindle Unlimited can read it for free."

"T.A. Bunker was motivated when she found one of her old creative writing stories titled "A Guidebook for ghosts".  It made her laugh and gave her the motivation to write some dark humor for lovers of the Paranormal.  What I really like about Taylor is when Paranormal shows were on all the time she became obsessed.  There are lovers of the Paranormal that share the same obsession.  She also experienced some of the same things that she would see on those shows.  There are countless readers that can relate to Taylor's experiences as well.  And that is what makes T.A. Bunker so important.  She knows what they want. And she continues to write her books in a way that captures her Readers attention every time.  Click on the link above and buy "A Ghost's Guide To Haunting"."

Posted by Empowered-individuals.blogspot.com at 9:52 AM