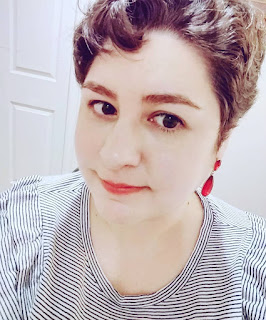 "Great Authors have a natural talent.  Sometimes they may not realize it or focus on it but once they have the opportunity to be creative their work shines like the brightest sun.  Their vision actualizes itself when pen meets paper and their story begins.  When people read they read with their own purpose even if it's just to pass the time.  Some readers seek to feel a sense of adventure in a book or just for relaxation.  These Authors satisfy their needs and then some.  Lauren Scharhag is one of these great Authors.  She let us know what motivated her."

"Hi, Jason. Thank you for hosting me on your site. I really appreciate the opportunity to talk about my work. The Order of the Four Sons actually started life as a screenplay back in 2005. Some friends of mine knew a director who wanted to film a horror movie in Excelsior Springs, MO, near where I live. I wrote the script, then called The Greater Dark, and got to do some other fun things with production, like build sets and hold a boom mic. One day, I met a nice guy named Coyote Kishpaugh, who was an extra in the film. We hit it off right away, and even started working together on a sequel for the film. But once the filming wrapped, that was it. The movie never actually got made. I still owned the copyright on the screenplay. About a year later, Coyote called me up and said, “That was a really good story. It’d be a shame to waste it. Why don’t we turn it into a book? Or better yet—a series of books?” So that’s what we did. We had no idea what we were getting ourselves into."

"I’m so close to all of them, it’s hard to choose one. All of them, both heroes and villains alike, have elements of my personality in them, so it’s hard to say one is more like me than the others. I’m a bleeding heart like Kate. I’m irreverent like Murphy. Sarcastic like Bill, analytical like Clayton, nerdy like Doug. Like Colonel Garnett, I curse like a sailor. I can be a bit elitist, like Bathory. I guess it’s good to have an ensemble cast like this, so you can break down your personality parts and spread them around. Like Whitman said, “I am large. I contain multitudes.”"

"The Order of the Four Sons is the first book of a series about two ancient organizations, the Order of the Four Sons of Horus and Starry Wisdom. For centuries, they have been duking it out for possession of a powerful artifact known as the Staff of Solomon. Whoever has possession of the staff can rip open the very fabric of existence. Book I introduces the heroes: Colonel JD Garnett, novice mage Kate West, Detective Ryan Murphy, scholar Doug Grigori, and field techs Bill Welsh and Cecil Morgan. The team is dispatched to investigate the disappearance of one of their own in a small town. There, they uncover a lot more than they bargained for—a segment of the Staff of Solomon, and the evil forces that are converging to claim it."

"Yes, I’m working on Going Forth by Day, the sixth and final book of the O4S series. It’s the final showdown between the Order and Starry Wisdom. In it, the ultimate fate of the staff, as well as the universe, will be decided."

"It’s available in paperback and ebook through Amazon, and through most ebook retailers. Here are the links:"

You can also read excerpts, trivia and other bonus material at my author blog:

"Lauren Scharhag was motivated by a Screenplay back in 2005.  The movie never got made but Coyote reached out to her a year later complimenting her great story.  My favorite thing about Lauren is how she didn't let that Screenplay collect dust.  Many of us have a vision or a project and when things don't work out it's on to the next project.  I really admire the way Lauren turned her Screenplay into a successful Book.  That takes determination and answering opportunities with action.  Lauren inspires us that when you create something that people want to use and it doesn't work out.  Don't waste it.  Revisit it and find a way to bring it to life in another way.  Thankfully this amazing book is now available to the world.  Click on the link and buy "The Order of the Four Sons".

Posted by Empowered-individuals.blogspot.com at 12:40 PM