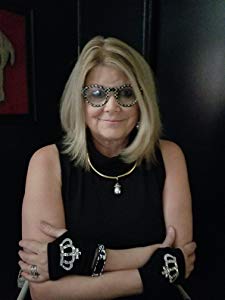 "Great Authors contimue to amaze us with their body of work.  They dedicate themselves to their Readers.  The pages they write and the chapters they finish are worked on and perfected like the masters of any craft.  To let their Readers and fans down is not an option to them.  My favorite thing about these great Authors as I said before is how they can look at a blank page and see the beginning of their next great book where most would just see a blank page.  Veronica Cline Barton is one of these great Authors.  She let us know what motivated her."

"Thank you, Jason, for having me a as guest on your blog—I love how you support the authors here, it’s very much appreciated!"

"In 2016 I had some major life dilemmas that needed to be addressed; season six of my beloved Downtown Abbey had concluded, and I needed to find something to fulfill my love for the imagined life on a lovely British country estate, LOL! I have always loved British cozy mysteries and am a huge fan of Agatha Christie, Rhys Bowen, and M.C. Beaton, so I decided to throw my writing hat in the ring to see if I could do it. I put my love for a Downton Abbey type production scenario together with my love for British mystery, and voila! The concepts for my series was born. I always try and be a little different in everything I do, so my main character, Gemma Lancaster Philips, PhD, is an American heiress who comes to live in this British, almost royal, cozy mystery world. The stories are told through her point of view, which leads to a few humorous happenings (and not so humorous mur-dahs) in her new world."

"Well I wish I had her metabolism, that’s for sure (she does like her food—finding all those bodies gives one an appetite, and she never seems to gain an ounce)! I can relate to her initial confusion as to what to do career wise after receiving her doctorate, the heartbreak of being cheated on by a boyfriend and moving on, and her love of her family and its history. She’s a hard worker and dedicated to those she loves, no heiress airs for her! I love travelling to the UK and seeing all the beautiful buildings and learning their history—Gemma and I share this love, and she luckily gets to live there in the beautiful trappings of the Cherrywood Hall estate."

"In this first book, Gemma is contacted by her British cousin, Evan, who happens to be the 8th Marquess of Kentshire and owner of the Cherrywood Hall estate. He has made it to the final four estates being considered for the set location of the new British period drama television series, Castlewood Manor. Winning the set location competition would bring in a huge revenue stream to the local community and give the estate resources to modernize and become more self-sufficient. Gemma agrees to come over and assist Evan and his estate manager, Kyle Williams in this new business quest."

"As they go through the final events of the competition, things turn desperate and dangerous—someone wants to win this at any cost. You’ll learn the history of the competing estates and their families and be treated to the glitz and glamour of the aristocratic countryside (and meet a few royals too). Gemma learns more about her Lancaster family heritage and comes to love life at Cherrywood Hall and the residents who live in the nearby village of Maidenford. Gemma, Evan and Kyle assist Scotland Yard in catching the ne’er do wells, but can they put an end to the mayhem before the production of Castlewood Manor even begins?"

"At this time, there are three books in my series. Cast, Crew, & Carnage; the Filming of Castlewood Manor is the second book, and the third, Deadly Receptions; the Debut of Castlewood Manor was just released on February 1st. I have just started formally working on Book 4 of the series that I hope to release in early summer, 2019. Exciting times!"

My books can be found on Amazon:

"Veronica Cline Barton was motivated in 2016 when the end of 'Downtown Abbey' had concluded.  First of all, her calling that a major life dilemma was hilarious!  Any 'Downtown Abbey' fan would know exactly how she felt.  Everyone can relate when their favorite show ends that there is a void to be filled.  Binge watching it and having weekend marathons of each episode will be fun but after a while there is a better way to enjoy what you love.  My favorite thing about Veronica is she found that better way.  For someone that loves British cozy mysteries, Downtown Abbey, and has a passion for the imagined life on a British Country estate, why not create something for those that miss it too!  She is brilliant!  Now Downtown Abby fans have something new to look forward to.  Written by someone that knows exactly what you've been missing and knows how to give it back to you in the form of a great book.  Click on the link above and buy "The Crown for Castlewood Manor"

Posted by Empowered-individuals.blogspot.com at 2:49 PM