Elizmi "Magical" An Interview with Elizmi by Jason E. Foss 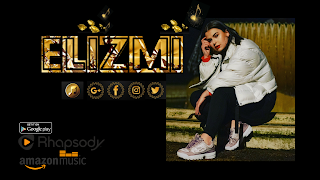 "Girl slams the door of her bedroom and jumps on her bed.  She was in love with this guy and he is not turning out to be how she pictured him to be.  She is almost a B student and she is getting heat from her parents and she is about to scream!!  No one understands her.  Tough times and no place to turn she turns the radio on and cries herself to sleep.  Lazy on a Sunday she doesn't have it in her to get up so she becomes best friends with her snooze button.  And then it happens.  A song comes on from a female artist with a catchy beat.  She feels the lyrics are speaking to her and she is waiting to find out the name of the artist.  Thankfully the DJ mentions it and she starts to google her.  Just for fun she liked one of the artists outfits and went to the mall and used her money to buy that similar outfit.  She put the song on repeat when she got home and the more she listened to the song the more she didn't care about other people's opinion of her.  A week later she wore that outfit and the guy was complimenting her left and right.  She was happy but that day changed her.  Getting lost in that artist gave her a new confidence and she now feels like nothing can make or break her.  Music is powerful.  Elizmi is one of those great artists.  She let us know what motivates her."

"My life motivates me. I use my experiences although I am still young I have been through a bit in my life. So I use these experiences to write my music. Also I am a great advocate for bullying and injustice, which also motivates me."


Jason:           "You have a powerful voice and you ride the beats so well it almost sounds like it's effortless.  Out of all the songs you ever wrote which one means the most to you and why?

"I Think its Lazy, I wrote it when I was going through a lot in my life. I had just broken up with my first love whom I had lived with and " thought I was" going to spend the rest of my life with. I knew deep down he was a bad one, as my parents, "who get along with everyone" did not like him. He really f'd my head up! I was young and believed every word he said. He ended up making me feel bad about myself and that I was worthless. That song made me feel empowered again, to have a song out there actually telling the whole world what an a-hole he was, is so powerful, I still suffer with anxiety but it means a lot every time its played on the radio or on Spotify. I can have a little giggle to myself. As I gain in popularity, I am also telling the story, like I am now, of why I wrote it and who it's about and That is awesome."


Jason:              "You hava a look that easily stands out into a crowd and your own sound.  It's great to see your hard work pay off!  What is your favorite experience so far where you had to tale a step back and say to yourself, 'Wow, I made it!'"

"Well, there are two if thats ok, the first I would say is being asked to come along and sing/rap at The Chip Shop in Brixton, London. I had really only just started to rap in my songs and I became friends with some really dope people on twitter. Anyway, I went there, and it was amazing, although its a small venue its very famous for HipHop, Ice T went there just two weeks after I was there. So yeah I stood back and was really pleased with myself.  the other time was when I started singing in the UK. I was picked to sing at a Beverly Knight concert, in Kent. I actually wrote my debut track to sing there. It was amazing and I got to meet Beverly, Lamar, and Kenny Thomas, which was amazing and brilliant. so I thought I had made it then... too but that was just the beginning."

"I would say, you have to live music, breath, eat and crap music... dedication and drive are the two words I would give them as advice. So if you think its easy, if you think you just have to sing a couple of songs and someone will come along and find you .... don't bother. It's a very hard career, full of expense and failures. I have done this, last year I had three girls who wanted to be in a girl group. I helped them, wrote songs for them and got them shows. But in the end they didn't realize how hard it was going to be. Rehearsing every day, going on line every day, writing.... the list is long. Even learning the business end. As an independent artist you have to look after your own legal stuff, if you don't know the business you are going to get ripped off. So I would say, it's a dedication my friend."

"I have my music on iTunes for sale I have other music for free on Soundcloud Elizmi-1.  but if you go to most good retailers you will find my tracks.

"Elizmi is motivated by her own life experiences.  She has been through a lot in her young life and she uses that to make great music.  There is so much to like about this great artist.  Songs like "Bad influence" and "Tallest Hill" can easily be put on repeat.  Then you hear "Lazy", "Magical", and "Shine" and you suddenly realize this artist has a natural talent for creating hits.  One of my favorite things about Elizmi is how open she is about her life and what she's been through, the motivation behind writing "Lazy", and her advice to those chasing their dreams.  She is living proof that hard work pays off!  So take her advice.  If you have a dream go for it.  Not just Monday and a few more days here and there.  Everyday all day!  Eat, drink, and sleep it.  No excuses just action!  She lets us in on the dedication it takes to make it and she is very inspiring and I wish her continued success!  Click on the link above and buy Elizmi songs on iTunes!


Posted by Empowered-individuals.blogspot.com at 8:39 AM