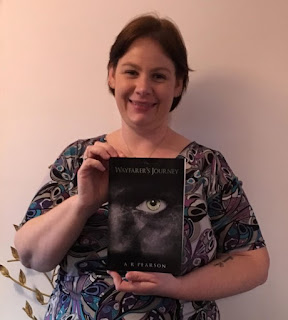 "Great Authors have every reason to be proud at the end of a great story.  Inside that book that they just created is blood, sweat, tears, and plenty of sacrifice.  Understand that behind a great story with characters that have a Journey, there is a brave and resilient Author with a Journey of their own.  A.R. Pearson is one of these Amazing Authors and she lets us in on where her motivation came from."

"When I was nineteen I became really ill. I had my first child, a daughter, in December 2000. I didn’t know at the time but the pregnancy had put a massive strain on my right kidney and sent it into failure.  I was in and out of hospital for three years, until the doctors worked out the problem and removed the kidney in 2003. It was during this time that I wrote The Wayfarer’s Journey.
My main character, Jack Orden, was my imaginary friend since primary school. I always wanted to turn him and his world into a written story. My hospital stays and operation recovery gave me the time I needed to write the book. It also helped me stay positive through the years of pain and illness.

"Jack Orden! Jack is, without doubt, my favourite character. I love him. He grew up with me, and he is my saviour in many ways.  I relate most to Jack. He is not your typical hero. He has flaws, but he has a heart of gold. I think his sarcastic, honest, loyal personality was mirrored from my own. Maybe some of his short-temper too, although I don’t think mine is as bad as his is!"

"An action-packed, fantasy fiction novel, following the journey of Jack Orden. He is a wayfarer running from his past. A brush with destiny brings a princess into his life and the discovery of a deadly plot within her palace. Jack decides to protect her, and finds himself caught up in the magical War of Power, which has been raging since the dawn of creation."

"The Wayfarer’s Journey is part one of a two-part story. The second book is called The Child of Light. It will be published around June 2019.  I can’t give you any details without spoiling the first half!"

"The Wayfarer’s Journey is available in three formats: hardback, paperback and E book. You can purchase it on AuthorHouse UK, Amazon, Barnes and Noble. You can also preview the first five chapters for free on Google Play.  I am also proud to announce the creation of my brand new website! www.jackorden.com.  May I take this opportunity to thank everyone, who has bought my book, I really appreciate your support."

"A.R. Pearson was in and out of the hospital for three years after her first child.  Going through that kind of recovery process can make someone feel weak at times almost to the point of giving up.  Thankfully for all of us she used it as motivation!  She turned weakness into strength and pain into accomplishment.  She created an amazing character Jack Orden who has been with her many years before.  Now she returned the favor and gave Jack life and he now lives in this Great Novel.   So get to know this amazing character by clicking on the www.jackorden.com link above and go to Amazon.com and buy "The Wayfarer's Journey".

Posted by Empowered-individuals.blogspot.com at 7:32 AM