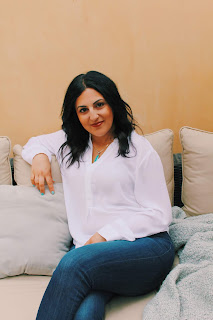 "Great Authors are all over the world and yet they have something special about them that causes them to stand out.  Could be the main character in their book.  Could be the writing style of the Author.  Could be both!  However these differences make reading so entertaining for us.  With all the different novels out there that provide you with the entertainment or the relaxation you need some of them leave an impact.  An impact that happens when an Author's words are so relatable that you feel like their words are actually meant for you.  Negeen Papehn are one of those great Authors that have the ability to connect with the Reader.  She let us know what motivated her."

"There aren’t many novels out there with MCs that are first generation Iranian Americans. I wanted to shed light on our culture at an angle that hasn’t yet been viewed, in a way that all readers of any nationality, could relate to. Forbidden by Faith follows Sara on her trials and tribulations as she sets out to find herself, in the pursuit of true love. But it’s more than just a love story. It takes a look at what the strength of familial bonds can endure, the fierce devotion between friends, and when independence can cost you more than you could have ever imagined. My hope is, that readers will identify with that."

Sara is bold in some ways but timid and uncertain in others. She’s indecisive and selfish at times. She’s young, confused, and impressionable. There’s moments when the reader wants to jump into the pages and shake some sense into her, but continuously roots her on and hopes she succeeds.
I’m a firm believer that there are pieces of us as authors in all of our characters. When I created Sara, I pulled from a younger version of myself, the one still trying to find her way, internally struggling with pleasing her parents while still trying to find herself in the process.


Jason:                "For your fans and book lovers, briefly describe “Forbidden by Faith” and the connection between Sara and Maziar."

"Forbidden by Faith is a modern day Romeo and Juliet. Sara is a young, Iranian woman getting ready to start Pharmacy school. She’s not looking for love like most of her friends have been groomed to do. She’s determined and focused on school, and ultimately a career that will leave her independent and self-sufficient. One night, she begrudgingly goes with her best friend to a party where she meets Maziar. He’s tall, dark, and alluring, catching her eye immediately. When he approaches her, she’s dizzy with how strongly she’s drawn to him. But once they get to talking, she finds out he’s Jewish. Sara is Muslim, and in her culture, their love affair is over before it’s even begun. Maziar doesn’t give up easily, though, and despite her better judgment, Sara agrees to see him again.
As time progresses, their connection just deepens, creating a desire as necessary to their survival as breathing. They struggle against their cultural and familial expectations but the love they feel for each other is just too strong and neither can walk away."

"The Forbidden Love series is a three book series. Although, I’m toying with an idea of a fourth.  Book two, Forbidden by Destiny, is currently in the process of publication with City Owl Press. It’s set to launch on February 19,, 2019. I don’t want to give away any spoilers, but this story will follow Leyla, Sara’s best friend, and her journey to find true love. All I can say is that a very popular character from Forbidden by Faith will be making a repeat appearance in Forbidden by Destiny.
Book three, Forbidden by Time, is Bita’s story, Maziar’s sister. She has her own struggles while finding her happily-ever-after. It’s currently in the early stages of revisions with my editor and set to launch shortly after book two. No definitive launch date yet."

"Forbidden by Faith is available where most books can be purchased. Here are some buy links to make it easier":

"Negeen being a first generation Iranian American was motivated by her want to shed light on their culture at an angle that has never been viewed, in a way that all readers of any nationality could relate to.  What is so amazing about this great Author is how open she is about her culture and how she wants to share it with Everyone!  Her book shows us that our differences are our strengths and true love is Universal and breaks down barriers.  This powerful book will touch you as the main character lets the Reader in on her Journey.  As she grows in each chapter the Reader will leave with the lasting impression that true love is worth fighting for, no matter what."

Posted by Empowered-individuals.blogspot.com at 8:01 AM