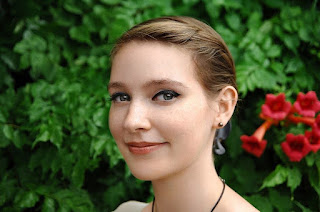 "Great Authors have this ability to answer their imagination back.  Characters can be in their head.  An idea.  A face.  A story.  A puzzle that just doesn't make sense to most people.  There are some Authors that not only see the character in their mind but they answer the character back.  They find the nearest pen and give the character Life.  They see the Idea.  They put a name to each face.  They decode a 1,000 piece puzzle of thoughts and a Novel is born.  Melanie Rodriguez is one of those Amazing Authors that gave each character life until The End.  Melanie shares with us where she gets her motivation from."

"I've worked on this series since I was 13 years old! I always had the characters in my head, speaking to me and begging to have their stories told. I began to pen down Artemis and her band of misfits on a snowy day in the weight room of my high school in my Freshman year (sadly it was considered a "free" period, so those of us who had it that quarter usually just lazed about); I had this empty notebook in my backpack for a while and I realized that day it was meant to be for them. When my mom found the notebook and read what was inside after I told her what I had been working on, she told me it would have been a terrible waste to let this story go to waste; friends had said the same. You see, I have a terrible habit of starting stories and not finishing them. I made sure after that day to continue giving these characters the justice they deserve, draft after draft, year after year. I wouldn't have it any other way."

"It's very hard to say. I've had a lot of people who know me ask if I made Artemis after myself (which she is not; I refer to her as stronger than I am). I do however, tend to put a bit of myself in some of my characters and then enhance their traits! For example, Shadow, the famed "Chosen" elven soldier, has a strict code of honor that I admire greatly; I have one too, but he follows his far better than I can. Perhaps I can say that I relate to the struggles of my characters more than relating to one single character; Artemis is of two races, whereas I am biracial. She also struggled with being accepted by others; I did growing up and do face the occasional reverse ageism to this day. Talisa, the witch of the elves, has the youthful appearance even though she is technically a crone (you'll have to read why!); to my earlier comment of reverse ageism, I am nearly thirty years old and have the appearance of an eighteen year old. Netira, a Blackwen City dhampir, has a fierce loyalty to her lover and the fellow oppressed; I too, am fiercely loyal to those I love and stick up to those who try to push me down. Truthfully, I relate to many of my characters rather than just one."


Jason:           "For those book lovers that would love to read your book, briefly describe "Child of Blackwen".

"Child of Blackwen is a coming of age young adult fantasy novel that describes the journey of the orphan dhampir, Artemis Ravenwing, the half-vampire half-human hybrid, who discovers the truth of her bloodline while learning the dark secrets behind her mother's murder. She is joined by a famed "Chosen" elven soldier, Shadow, who has his own share of troubles, as well as her best friend and also an elf, Jack, who has a strange way about him in the ways of magic. Others join Artemis in her journey, each with their own troubles and all with the same task in mind; protect Artemis Ravenwing and to right the wrong that has enslaved Artemis' ancestral home. Anyone who enjoys young adult tales consisting of magic, love, adventure, and a healthy dose of sarcasm will enjoy my book series."

"I certainly do! I am working on the third installment of the Artemis Ravenwing novels, Champions of Arrygn. I wrote the first draft of it years ago and lost count of how many I've done since. This current draft feels to be on the right path compared to the others so I am hopeful about it. I'm still not certain when it'll be published, but I do hope to finish it by the end of 2019. There is a lot of court/political dueling going on with this novel, as well as the coming of a global war within Arrygn. That is the most I can reveal, so stay tuned for more as time goes on!"

"Amazon is the easiest place to find all of my works! I am available through Barnes and Noble as well, and you can request my novel at your local library. My Amazon Author page is the best place to find Child of Blackwen especially":

"So Melanie was motivated by characters literally begging her to tell their story for them.  Why?  Because they knew only she could tell it the way it needed to be told.  It takes a special kind of person to not only have an imagination without limits but to have the selfless determination to not stop writing their story until The End.  Go to the Amazon link above and buy "Child Of Blackwen" by Melanie Rodriguez."

Posted by Empowered-individuals.blogspot.com at 2:51 PM