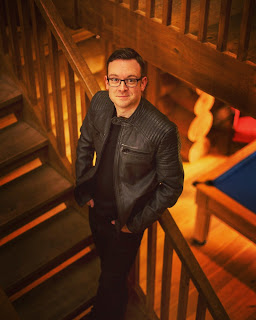 "There are plenty of great Writers out there.  A lot of my Favorites are so cool and down to earth and open up to their fans any chance they can.  There is one in particular that I was referred to by another great Writer.  His name is Sean McMahon.  I am determined to find out what motivated him to write his new book "Fir Lodge".  His high energy and passion for writing is hard to overlook.  I also noticed he always shows love to his Restarter community.  No wonder he has such a loyal following."

"It was a unique situation that led to the creation of my first novel. I was attending a friend’s thirtieth birthday at the real life Fir Lodge in Norfolk. A chance encounter led to a series of events that, to say, would be to spoil, but it led to me and two of my friends joking how it would make a good movie."

"With no idea on how to write a screenplay, or a novel for that matter, I began researching on how to do just that. And after writing my first page, the ideas started coming thick and fast. Before I knew it I had outlined my story. From then on out, what motivated me was the need to complete it! To bring this crazy idea into the real world. Every spare moment I had was consumed by it. It was a real labour of love.  But I think the real motivator to write it is that Fir Lodge was a story I wanted to read."


Jason:            "Your website is really cool.  Not too many people get that creative to make you feel like you're really entering the lodge.  You're book cover looks great too.  What is the main reason you go the extra mile to give your fans a great experience before they even open the book?"


Sean:              "Dude! You’re the first person to ever mention that my website is designed to simulate entering a lodge! Thank you so much for noticing, that was always my intention when building it. Of course, before the book launched, those visiting the site had no context. It was a muddle at first, trying to establish branding. So if that’s okay, I’d like to set the record straight. Fir Lodge is the name of the first book in The Restarter Series. The Restarter Lodge is the home of the Restarters, where readers (or potential readers) can go to learn more."

"That is very kind of you to say that I’ve gone the extra mile. From the moment I put pen to paper on this project, I wanted that to show. I wanted the cover to be vibrant, and draw people to it. After all, I didn’t play it safe with the title <laughs> but that was also intentional. I did a lot of research on cover designs, and quickly realized that my ideas didn’t match my abilities. So the first thing I did once I had a chapter under my belt was hire a cover designer. The wonderful Sam Moore took my terrible sketches and made them into what you see now."

"If you’re working on a book, I strongly recommend doing the same. There’s no shame in acknowledging when you need help. And the cover is super important."


Jason:              "What is your favourite thing about Hal and Kara and what is their strongest quality that separates them from the others?"


Sean:               "Oh man, my favourite thing about Hal and Kara is how different they both are to one another. I tried to craft a sort of buddy cop dynamic between them. Hal, for example, is very much clued up on movie references, cinematic tropes, and bases his entire understanding of time travel on the movies he’s seen and half-finished articles he may have read in the past, so to speak."

"Kara, on the other hand, is far more pragmatic. She isn’t obsessed with pop culture like Hal. I wouldn’t go as far as saying she’s overly analytical, but she keeps Hal grounded. She’ll call him out on his BS. And she has an internal strength that, as the book progresses, is going to take her character into some interesting directions."

"It was important to me that my characters lived in the “real world.” Our world. That Hal had seen the movies you and I have, read the books we have. I wanted the reader to feel like they were learning how the time travel scenario would play out in tandem with Hal and Kara. For the reader to know everything the protagonists know as it happens."


Sean:             "Fir lodge is the first instalment in a time travel adventure series. It focuses primarily on two ordinary people who are thrust into an utterly unreal scenario. Together Hal and Kara must unravel the secrets hidden within their own past in order to make sense of it all. And decide exactly what they are prepared to sacrifice to defeat a malevolent force that has already won."


Sean:             "I can tell you that writing sequels is hard, man! <laughs> The writing community warned me how hard it is to write your second book. They weren’t kidding!"

"Absolutely! The manuscript for the sequel to Fir Lodge, titled The Dark Restarter, is currently with my editors. Once they’ve gone through it, it will be full steam ahead. I’m hoping to get it into the hands of the Fir Lodge readership early next year."

" 'The Dark Restarter' is set six weeks after the events of Fir Lodge, and will serve as both a prequel and a sequel."

"But it’s always an honour to earn a new reader! You can purchase Fir Lodge by popping onto Amazon and typing Fir Lodge. It’s also available digitally on kindle."

"That weird title really helps new readers in refining their search. Totes intentional. Sort of.
Thank you so much for featuring me Jason, absolute pleasure hanging out!"


So Coffee and real life events at an actual 30th birthday event at the real life Fir Lodge in Norfolk motivated Sean to write such a great book.  However the Biggest motivator is that "Fir Lodge" is a story he wanted to read.  So with no story like it he decided to take matters into his own hands and write it himself.  No wonder entering his website looks so realistic as if you are entering the Lodge itself.  His book cover is so well done thanks to Sean leaving his ideas of a vibrant cover into the hands of an excellent cover designer Sam Moore who brought his ideas to life.  If you want to read a book from an Author that puts his all into everything he works on go to Amazon.com and buy "Fir Lodge".